There are probably a few people out there who think musicals are silly but personally I enjoy going to see them. They transport you to a world of make believe, a world where people burst into song and sound great, full of colour and light and usually a happy ending rousing finale that makes you walk out with a big smile on your face, thinking that maybe the world is a better place than you thought.

I probably haven’t been to that many compared to some true fans but here are the shows I’ve seen in the West End and what I thought about them:

1. The Lion King – I saw this with my family and was disappointed. The cast at that time weren’t that great and I just didn’t get a great feeling watching it. Shame because the film is great!

2. My Fair Lady – I went to see this hoping to see the lead actress but she was sick and I got the understudy so that was a shame but it was a good solid production.

3. Joseph – I went to the new version of this after the BBC reality show and watched the winner Lee Mead – the show was fun and colourful and he was great in it. Well worth seeing.

4. The Woman in White – A new Andrew Lloyd Webber production which closed really quickly. I actually enjoyed it – it was powerful and dramatic with a great mystery story line and some beautiful music.

5. Legally Blonde – this show is brilliant! It’s just lots of good cheesy fun and we were all on our feet at the end. I’d definitely watch it again. 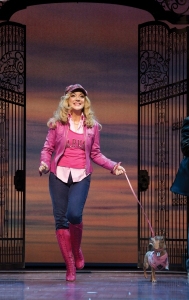 6. The Sound of Music – I went to see this again after a BBC show to find the lead but by this time she had left and someone from a soap was in it. The production was slick and professional and I really enjoyed it.

7. Grease – hideous. Nothing like the film. Don’t bother watching this!

8. Blood Brothers – a great story, powerful and moving and pretty sad. Overall music not as good as the story but a strong end song so all is forgiven.

I must give a shout out to some great musicals which I’ve seen the film version not the live version of:
– Hairspray
– Chicago
– The Phantom of the Opera
– Evita
– Moulin Rouge

39 thoughts on “Break into song”

Today has been a supermarket trip followed by an afternoon in the garden writing and reading. Thank goodness the weather is gorgeous right now 😎
Even though everything is far from normal right now, I’m still trying to keep Sunday’s as a day off from writing. A day for tea and books, walking in the park, watching films, and eating something yummy for dinner. How are you spending your Sunday? ❤️
Made it through another week! I’ve been writing today and just watched and loved the @bensplatt Netflix special. Yesterday, I enjoyed the rom com Carrie Pilby on there. What Netflix recs have you guys got for us? 💕
Pastel rainbow nails for the win 💕💕💕
Contemplating life in my garden in the sunshine 😎 My days at the moment are editing my next book, trying to get out for a walk, and lots of Zoom chats - how bout you guys? 💕
Sunshine and bluebells to make us smile. What’s your favourite thing about Spring? 😎