Elizabeth and I connected through our blogs and sent each other stories to critique. She was the first person to read the story that landed me an agent 🙂 I gave Liz feedback on another story but it was her book The Second Sign that landed her a publishing deal. I finally read the book after waiting ages for it to come out and I thought it was fab. I’d describe it as a YA supernatural thriller about a girl and boy who find themselves caught up in the war between angels and demons. It’s fast paced, full of action and romance and well worth reading.

The Goodreads summary of The Second Sign: Bred to believe in the war between angels and demons, Gabby has come to the conclusion that love is responsible for war, jealousy, and all the other deadly sins she can think of. So when she’s exiled to the middle of nowhere for getting kicked out of her fifth school for fighting, she doesn’t expect to meet Jake. Much less fall in love. But Jake is quickly drawn to the eerie beauty of her violet eyes while Gabby is unsettled by their undeniable connection.

When a demon guardian comes to collect her soul, she refuses to give it up. She’s not a demon. She can’t be. Her father and twin brother are angels. The demon gives Gabby twenty-four hours to decide her allegiance, and then starts killing her short list of friends, leaving a message behind: She is the Second Sign.

As Gabby and Jake begin to unravel the mystery behind the Second Sign, she learns Jake may be the key to saving her soul. But it means a sacrifice has to be made that will change their lives forever.

How did you come up with the idea for The Second Sign?

The idea came to me in a dream. Weird, I know. During construction of my basement, I dreamt one of the workers, dressed in red coveralls, entered my bathroom without a word. After a few minutes, he came out, stepped into the light, and exploded. But before he exploded he mentioned the second something. Second coming, second sign…something that I needed to get a grasp on. And after doing some research I found the biblical reference of the Second Sign. And a story was born.

The book creates a world where angels and demons are at war – did you have to do any research for the book and what interested you about these creatures?

I’ve always been afraid of demons. As a kid my dad would tell us stories about how the devil roamed the countryside taking a form of a man with a goats hoof. Kinda explains why I came out the way I did…lol.

Anyway…I always wanted to write something scary and since demons scare the crap out of me, and after the weird dream, I went with it.  Now the angels are a different story. They were harder to grasp. But after seeing some images as to how angels are portrayed. I started to fill in the blanks using my creative license. The element of free-will and the theory that love, hate, and everything in between is inherent in ALL living beings was born. Yes, even demons.

You write the story from both Gabby and Jake’s point of view – how did you draw their characters and did you find it challenging to juggle two POV’s?

I have always been curious with the whole nature vs. nurture question. Are we a product of our experiences in the world, or our biology? Or both? I drew Gabby’s character with that thought in mind. She’s half angel, her biology dictates that. But she is also experiencing the world through a different view point than her angel brother. This internal conflict drives her.

I wanted Jake to be her complete opposite. While she is pessimistic, he sees hope. While she doesn’t trust anyone, he trusts her. He is her better half. And he experiences the most change in his character arc at the end.

Writing from both POV’s was a challenge because I wanted it to be alternating chapters and I needed to show certain things through the viewpoint that made more sense, so I structured the scenes around the chapters.

There will be a sequel to the book (yay!) – did you find it difficult deciding how many answers to give the reader and how much to hold back for the next book?

Yes! I wanted TSS to have a mysterious element. Who did it? I didn’t want the answers to be obvious. During the querying stage of book one, I only had the first three chapters of book two outlined with a broad overview of the theme. But after book one published I started connecting the dots and they fell in place a bit too perfectly. Let’s just say, I expect that most of what went unanswered in book one is touched on in book two, hopefully, seamlessly. I relied on my betas and crit partners for book one to let me know how confused they were 🙂

Who is your favourite character in the book and why?

I actually fell in love with Pat. I am drawn to dark, broken characters. I had a lot of questions for Pat. But I also had to keep it elusive because book one wasn’t about him and I didn’t want to move the focus away from Gabby and Jake.

There is a lot of death and destruction in the book – was it important to you to not to sugarcoat anything for your YA audience?

This is such a great question! The first murder scene I wrote was Marty’s possession, and it happened during the first draft with little thought on my part. If that makes sense. It just happened. After she does what she does and enters her brother’s room I stopped writing. I had to pull away and regroup. I asked myself what the eff is going on? How could she? Why is this scene important? Is it too dark?

I realized then the story I was writing was dark. I also realized this was a pivotal point in the story to show the dangerous situation Gabby faced that would ultimately lead her down a path I wanted her to follow. Yes. It was necessary. I brainstormed it with my son. He loved it. I kept it. It wasn’t until after the reviews came in that I realized the reason why it was so dark. I wrote it in the POV of Marty. The person doing the action. It wasn’t a bystander looking in, but us looking out. And I think that changed the level of intimacy with the scene and the level of fear.

The tone of the book and the battle between angels and demons reminded me of TV show Supernatural – did you have any inspirations that fed into The Second Sign?

Ha! I’m so happy you asked this. Actually, no. But I found Supernatural after I started submitting. I had posted the first 250 words for review during a contest on my blog and one of the bloggers mentioned that it sounded like Supernatural. I’m like…yeah, it is supernatural. Then I looked it up and I found Dean. **swoons** I did a whole week of catching up on netflix. My son is now urging me to add the car in book two. lol.

(VW -this means we can have a photo of Dean, right? Right!) 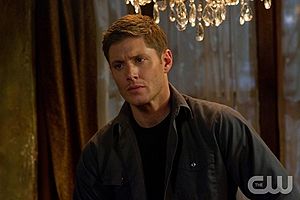 The Second Sign is your debut novel – did you know it would be The One when you were writing it?

No. I didn’t. I wrote TSS on a rebound from my first manuscript heartbreak. The one I wrote and submitted before TSS. I wrote this one to forget the other one. But I became optimistic when my crit partner said this was the one. She obviously knows more than me.

What advice do you have for aspiring authors out there?

I don’t want to discourage anyone. And there are some great success stories out there. Those are the ones we tend to hear and clutch on to.  Publishing is hard work and you really need a thick skin to stay alive. It helped me to remind myself that publication is a perk, and not the reason I started writing in the first place. Even if I don’t publish anything any more I will continue to write because it is a part of me. So for advice…don’t lose the core reason of why you write. Do it because you love it and everything will fall into place.

Thanks for the interview! I do have a Q/A group up on Goodreads if anyone has any questions I’ll be happy to answer them.

Thanks Liz! If anyone has another question for Liz or me, feel free to ask it below!

11 thoughts on “Meet the author: Elizabeth Arroyo – The Second Sign”

Even though everything is far from normal right now, I’m still trying to keep Sunday’s as a day off from writing. A day for tea and books, walking in the park, watching films, and eating something yummy for dinner. How are you spending your Sunday? ❤️
Made it through another week! I’ve been writing today and just watched and loved the @bensplatt Netflix special. Yesterday, I enjoyed the rom com Carrie Pilby on there. What Netflix recs have you guys got for us? 💕
Pastel rainbow nails for the win 💕💕💕
Contemplating life in my garden in the sunshine 😎 My days at the moment are editing my next book, trying to get out for a walk, and lots of Zoom chats - how bout you guys? 💕
Sunshine and bluebells to make us smile. What’s your favourite thing about Spring? 😎
Getting dressed up for the supermarket is life now 🤣