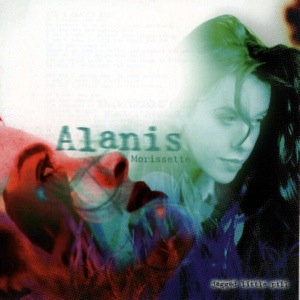 I was 12 when Alanis Morrisette released Jagged Little Pill twenty years ago and it was one of the first CD’s I bought for myself. I remember being nervous but excited seeing the ‘parental advisory’ sticker stuck on the front. My mum complained whenever I played the album as it sounded like wailing to her. That obviously made it even cooler to me.

Twenty years on, Jagged Little Pill remains a favourite. When I was 12, I couldn’t fully understand or appreciate the stories she tells on the album, I just enjoyed singing along loudly to You Oughta Know! But now I can. As a writer, you can learn a lot from the way Alanis tells a story in the space of three minutes. You instantly feel the way she feels about the ex that’s the subject of a lot of the album. You can relate. You have felt the same way yourself. That’s why the album is timeless. Emotion has no expiry date, and the album is full to the brim with emotion – anger, sadness, regret, it’s all there.

It’s a truthful album. It’s honest to the point you squirm for her. It’s still rare for an album to feel so personal. I think Taylor Swift is the only current artist I can think of that speaks so personally through music (though less explicitly!) I think that’s why the album has consistently been on best of lists, why it sold so many copies, and why it remains so many people’s favourite. Again as a writer I have learnt from this. Using your own experiences, drawing on emotion you have felt and passing this on to your characters helps make stories feel truthful, and readers will respond to that.

This album much started a lifelong love of music. I still buy CD’s (am
I alone in this?!) and am still drawn to songs that tell a personal story, that make you feel something. I connect best with emotional stories, and I think this has fed into the stories I tell myself.

To celebrate the album’s 20th anniversary, I shall be listening to it as I start to write my next novel. I would love my own writing to be as emotive (and successful!!!) as the writing is on these songs. I think as a writer to know that someone has connected with the story you have written is all the success you want, and need.

Are you a fan of Jagged Little Pill?r

6 thoughts on “You Live, You Learn: 20 years of Jagged Little Pill”

Even though everything is far from normal right now, I’m still trying to keep Sunday’s as a day off from writing. A day for tea and books, walking in the park, watching films, and eating something yummy for dinner. How are you spending your Sunday? ❤️
Made it through another week! I’ve been writing today and just watched and loved the @bensplatt Netflix special. Yesterday, I enjoyed the rom com Carrie Pilby on there. What Netflix recs have you guys got for us? 💕
Pastel rainbow nails for the win 💕💕💕
Contemplating life in my garden in the sunshine 😎 My days at the moment are editing my next book, trying to get out for a walk, and lots of Zoom chats - how bout you guys? 💕
Sunshine and bluebells to make us smile. What’s your favourite thing about Spring? 😎
Getting dressed up for the supermarket is life now 🤣